One For All: 5 Reasons Why “The Musketeers” Should Be On Your Summer Watchlist

Season 3 of BBC’s The Musketeers premiered on May 28th and it will sadly be its last. Now, if you’ve been watching the show according to its Canadian airing times like I have, you will have seen its fantastic series finale by now. It surprises me that though The Musketeers, starring the likes of Luke Pasqualino, Tom Burke, Howard Charles and Santiago Cabrera, has got a small, yet incredibly loyal following, many others are not familiar with this impressive period drama. It’s got everything one could possibly ask for in a show; beautifully choreographed fights, love, stunning costume design, intriguing characters and great antagonist. Here are five reasons why The Musketeers should be on your summer watchlist.

I hate to state the obvious but The Musketeers is nothing without its Musketeers. Whoever casted these four gentlemen did a fantastic job because the chemistry (read: bromance) between them is real. There’s almost too much sass for the TV screen to handle. Each Musketeer has an intriguing backstory, one more shocking than the other. We learn that Athos was once married to Milady de Winter, who subsequently killed his brother. He then orders to have her killed, as you do. Meanwhile, Aramis opens up about his lost loves, whilst Porthos prefers not to revisit the past at all. See, I’m only scratching the surface here but I can tell I have got your attention. The Musketeers has also got some strong, badass female characters. Constance and Milady de Winter might be complete opposites but both let nothing and nobody stand in their way. Constance breaks free from her controlling husband to be with d’Artagnan and Milady is the definition of fearless and cunning, regardless of her bad intentions. The fun never stops when you’re living and loving in 1630s Paris. 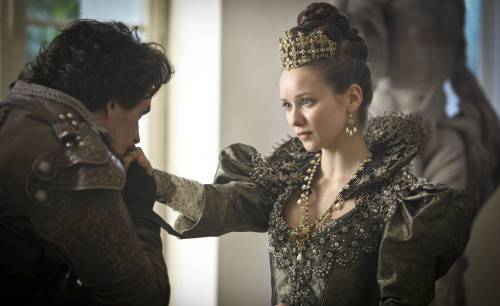 It would not be a true period drama if it was not also a tale of forbidden love. In Season One Aramis finds himself in bed with the Queen, at a convent no less, and we later find out that she is carrying his child. Meanwhile, d’Artagnan falls in love with Constance, a married woman, and Athos’ love-hate relationship with his ex wife Milady de Winter, a dominant antagonist, is anything but perfect. Relationship status: it’s complicated. With each season consisting of a mere 10 episodes, there is no room for dragged out romances. The time it takes for some of these lovebirds to finally get a move on is nonetheless frustrating, yet making it all the more satisfying when they do at last admit their feelings for one another. Love ultimately prevails but these Musketeers must jump over plenty of hurdles to get there. I am talking murder, evil antagonists, broken promises, cheating and scheming, and even children born out of wedlock. If you love a bit of romantic drama and would love to dig deeper into the power of intense, passionate eye contact, this show is for you.

Each season welcomes a different villain who miraculously finds his way into the palace and close to the King. Doctor Who‘s Peter Capaldi’s departure after Season 1 made way for one of my favorite antagonists, Comte de Rochefort, played by Marc Warren. He’s an old ‘friend’ of the Queen “who worms his way into the court and becomes the King’s right hand […] to get in bed with the Queen”. His obsession with her takes a turn for the worst when he discovers her secret. Still, you can’t help but like Marc Warren and his onscreen charisma. In Season 3 none other than Rupert Everett takes center stage as Marquis de Feron, or as Everett himself has described him, a “coiled, complicated cripple on drugs […] with a sense of humor and a kind of passive violence”. The poor King seems to be loved by no one and ridiculed by all the baddies in the show, making him an easy target for Feron and his accomplice Lucien Grimaud (Matthew McNulty). Will they succeed in de-throwning the King? Feron’s position as head of the Red Guard and place in the court sure takes them a long way.

The pieces the costume designers produce each season are absolutely stunning. Leather, tweed, sleeves, capes, corsets and massive amounts of skirts, there is almost no acting required. Though I love what the Musketeers wear, Queen Anne takes the cake (in the most positive way). Her dresses are true works of art, and I have no idea how Alexandra Dowling manages to move around in them as if she were not wearing four layers of fabric and a corset. To create costumes that look good on an HD television screen, are authentic, as well as historically accurate seems like an extremely challenging task, yet costume designer Phoebe De Gaye has done a magnificent job. It therefore doesn’t surprise me that she was honored with a BAFTA for her work in 2015. Speaking to The Telegraph in 2014, De Gaye describes the complex process of costume design as follows:

“Each cloak has over 100 buttons and there are over 50 of these cloaks, so that’s a lot of buttons to sew on. Not to mention the buttonholes. […] It can take us up to three hours to dress that many people, so if the unit call is at 7.30 am you can imagine how early we have to get started.”

Now imagine having to dress 200+ people for a crowd scene. Impressive, right?

The show, as one would expect, is adapted from Alexandre Dumas’s famous The Three Musketeers, and so there is bound to be some epic duelling. Protecting King and country isn’t an easy task, and with danger lurking around what seems to be every single corner, Athos, Aramis, Porthos and d’Artagnan are prepared to draw their swords at any given moment. All four actors were in fact required to go to bootcamp to take their horseback riding and sword fighting skills to a whole new level. “Because the fights are choreographed in such an artistic way, it makes it so enjoyable [to watch]”. They are quick, action-packed and captured beautifully. Season 3 starts off with an epic war sequence between France and Spain, it is bigger than anything the show has done before. The season opens with an actual bang. Shot in three phases and over multiple days this particular sequence is merely one of many examples of The Musketeers’ high production value.

All For One And One For All

I honestly could not praise this show any more than I already have. I wish there were another 30 hours to watch but instead we are left with 1800 minutes of pure drama, action and intrigue that will keep you busy for at least a good part of the summer. Go on now, add The Musketeers to that summer watchlist of yours.

What television show are you watching this summer? Let me know in the comments below.

5 Comments to “One For All: 5 Reasons Why “The Musketeers” Should Be On Your Summer Watchlist”